In-person rehearsals are back!

​After 16 months of fortnightly Zoom rehearsals we are pleased to announce that we returned to in-person rehearsals on Wednesday July 21st. As you will see from the photo band members were seated 2 metres apart and tight Covid protocols are being implemented to keep everyone as safe as possible. It was fantastic (and quite emotional) to be back making music together and we look forward to being able to hold concerts again.

Welcome to Leicester Community Concert Band based in the City of Leicester. LCCB was established in 2007 and has grown to include over sixty musicians, making it one of the largest amateur wind ensembles in Leicestershire.

In 2017-18 the band celebrated its 10th Anniversary by taking part in the National Concert Band Festival, receiving a Platinum Award in the regional event. As a result the band was invited to take part in the National Finals held at the Royal Northern College of Music in Manchester, when the band achieved a Gold Award.

The 10th Anniversary celebrations culminated in a spectacular joint concert with the Band of the Grenadier Guards last summer and we were delighted to welcome the band back again this summer. LCCB produced a CD to mark their 10th Anniversary, reflecting the development of the band and demonstrating its varied repertoire which has an appeal for a wide range of musical tastes. The CD is available through any member of the band, priced £10, and we hope you will enjoy the result.

The band performs a varied repertoire which includes well known marches, music from shows, arrangements of classical works, popular tunes and favourites from the British wind band tradition. There is something to suit all tastes.

Please feel free to explore our website. If you require more information please don't hesitate to contact us via email.

Whilst LCCB was unable to meet in-person the band continued to meet and play together through fortnightly Zoom sessions. 2020 concluded with a Christmas social on Zoom, where over 45 band members played along to some of our favourite Christmas pieces, including Sleigh Ride, A Christmas Festival and Minor Alterations. The evening also included sharing some of our best topical and musical Christmas jokes, including 'Did you hear that production was down at Santa’s workshop? Many of his workers have had to elf isolate!'.

Our 2019 Christmas concert ‘Celebrate the Season with Leicester Community Concert Band’ was the first one held at The Covenant Life Church and organised in association with them. There was no doubting the Christmas feel to the concert, with the band playing a range of Christmas favourites, including It's Christmas, Sleigh Ride, A Most Wonderful Christmas and A Christmas Festival. The audience also enjoyed some less well-known pieces, including Minor Alterations, Fairy Doll and Christmas in the Nursery, and played  their part singing a variety of Christmas carols. As a result of the concert LCCB raised £700 for the charity ‘Live Life Give Life’, in memory of Don Blakeson, and £700 for the charity ‘Rainbow Trust Africa’ which is supported by the church. The photo shows the presentation of the cheque to Dennis Burton, Director and Trustee of Rainbow Trust Africa.

Following a highly successful event in 2018, Leicester Community Concert Band once again acted as hosts to the Band of the Grenadier Guards, in a joint charity concert held at Wigston College in June 2019. The Grenadier Guards had only just completed a hectic schedule of ceremonial duties, which included the 75th Anniversary of the D-Day landings, as well as their traditional Royal duties at Trooping the Colour.

On arrival at the college the Grenadier Guards conducted a workshop with a group of young musicians from local schools. Director of Music, Major Michael Smith gave them an insight into the professional world of the Band of the Grenadier Guards, and following a brief rehearsal, the youngsters were able to perform a short concert.

LCCB opened the evening charity concert with the National Anthem followed by an original piece which featured the Fanfare Trumpeters, resplendent in their scarlet uniforms.

LCCB continued with a varied programme, including arrangements of music from the film ‘The Greatest Showman’ and well known songs by Elton John, reflecting the popularity of the recent biopic ‘Rocketman’.

The Grenadier Guards then demonstrated their versatility by playing in Big Band style, highlighting the individual virtuosity of the players. Judging by the enthusiastic applause of the audience, their performance was much appreciated.
​
Following the interval, the full Band of the Grenadier Guards presented an exciting programme, which culminated in a memorable performance of Vaughan Williams’ ‘English Folk Song Suite’.​ 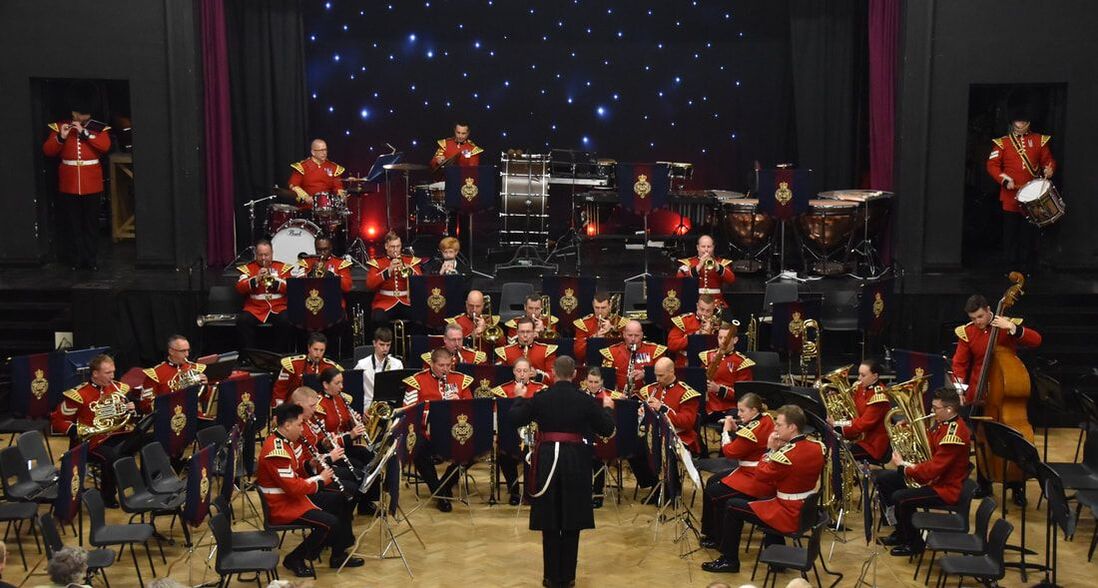 ​The climax of the evening saw LCCB joining forces with the Grenadier Guards to form an ensemble of more than 100 musicians. Major Smith led the combined bands in a performance of ‘Scarlet and Gold’ by Rob Wiffin, in which the fanfare trumpets were once again to the fore. The massed bands also performed music from ‘West Side Story’ and ‘Bohemian Rhapsody’. The concert concluded with a stirring performance of the music from the film ‘The Great Escape’.
​
Musical Director of LCCB Brian Humpherson MBE, said ‘It has been an honour and a privilege to host the Band of the Grenadier Guards for a second time. Our musicians have  enjoyed the musical experience of a lifetime.’

Watch the bands in action.